You canfind Trakehner`s are the top levels of most equestrian sports, below you can search to find Trakehner Stallions for breeders to use from all around the world. To add a stallion to Stableexpress please email your stallions details to stallions@stableexpress.com. Trakehners horses can be seen in many different equestrian sports with a number of top Trakehner competition horses including Trakehner showjumping stallion Abdullah who represented USA with Conrad Homfeldat at many major equestrian championships including the WEG and the Olympic games. Below you can watch Trakehner stallion Abdullah competing with the Conrad Homfeldat the 1984 Los Angeles Olympics.

Abendtanz - Trakehner Stallion Abendtanz is a popular breeding stallion for dressage and showjumping, and was crowned Trakehner champion at the 2013 performance test, with impececable breeding he attracts some of europes top broodmares and is producing outstanding progeny, click here to watch video of Abendtanz 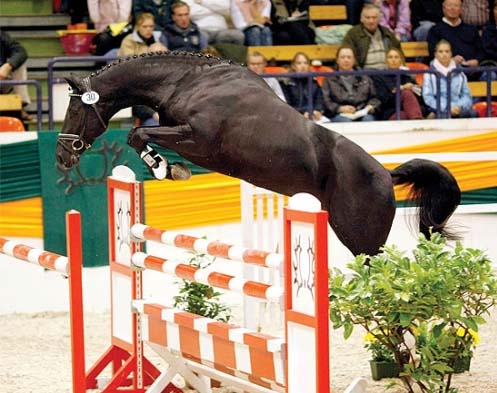 Abglanz
Born in 1942 Abglanz has been a hugely influential for the breeding of the modern Trakehner sport horse, standing at Jork stallion station Abgland sire three sons Abhang I, II and III all become important breeding stallions, these three brothers also had a full sister Zukungt who was competed by Alwin Schockemohle. Abglanz blood was used in a number of other German studbooks to bring more blood into there types. 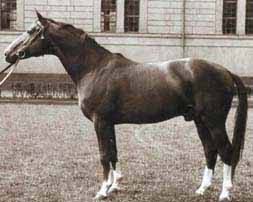 Kostolany - Famous trakehner stallion (Totilas, Blue Hors Matine...)
(1985 - 2013) Kostolany had a huge impact on today`s breeding. You can find him in the pedigree of : Totilas, Gribaldi, Painted Black, Blue Hors Matine, Sisther de jeu and many others... 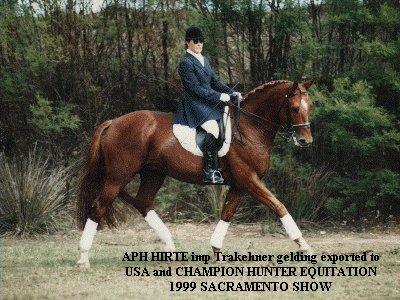 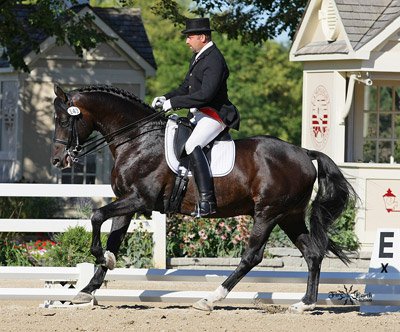 Steinburg embodies all the qualities knowledgeable breeders look for in a sport horse stallion; outstanding temperament and trainability, three excellent gaits and proven durability and soundness.

Steinburg exhibits the conformation and refined elegance ideally suited for dressage. He has a natural ability to collect, evidenced by a quick and active hind leg. His walk is forward and swinging, the trot elastic and his canter uphill and well-balanced. Breed to some of the most desirable bloodlines in the sport horse industry!

Steinburg is a proven performance and breeding stallion

Prior to importation, Steinburg was winning at I1 in Europe. In addition to success in the show ring he has produced a limited number of outstanding offspring in Denmark and Germany. Steinburg’s famous, champion sire Kennedy and German Elite stallion Michelangelo are descendents of the highly valued foundation Trakehner bloodlines of Pasteur xx x Matador x Kosmos. Steinburg’s dam sire, German Elite stallion, Marduc was ranked as one of the top stallions in Germany with a score of 144. Because Steinburg’s sire Kennedy died at a very young age and produced only four approved sons, Steinburg is the last remaining sire to carry this unique combination of bloodlines. He exhibits the same elegant Trakehner type as his ancestors. Steinburg’s three beautiful, elastic gaits are matched only by his outstanding temperament and rideability.

Steinburg passes on these bloodlines known to produce substance, character and movement. His offspring represent an ideal combination of traits suitable for amateurs and professionals alike who wish to pursue a variety of sport horse disciplines. Beaujolais II - Stood: 2005 at Tannenhof Stables
Beaujolais II is a son of the renowned producer Karon out of the superior BEA mare line that has produced grand prix dressage horses and the elite stallion Banditentraum. Beaujolais II was approved during the 100 day Trakehner Verband approval test in 1991 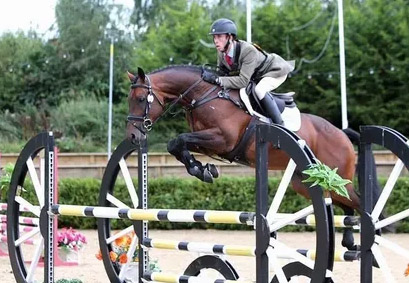 She competed under saddle with the talented Jonathan Sutton dressage rider during 2018/2019 finishing the year competing at the British Dressage Nationals at Stoneleigh.

Bluewood Tallulah - Born: 2010, Sire: Trocadero, Dam: Dedication (hann), Dam Sire: De Niro
Talula was bred by my very good friend and outstanding horse breeder Sian Prosser Reade from the Bluewood stud in Sussex. Tallulah has the soul of an angel and exquisite beauty. She really is a special lady and enjoys life under saddle always trying her very best. 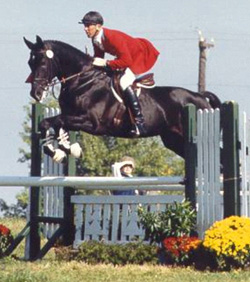 Holme Park Krug is a UK stud farm and breeder of Trakehner horses, with a breeding programme producing future sport horses of the future carefully selecting horses with proven ability, temperament and beauty.