The Mongol Derby is an equestrian endurance race. The race extends 1000 km through the Mongolian Steppe and is known as the world`s longest horse race. The course recreates the horse messenger system developed by Genghis Khan in 1224. In the 2016 race, there was 21 men and 23 women playing the role of the messengers, and representing 13 countries. The exact course changes every year, and is kept secret until shortly before the race begins. The terrain will invariably include mountain passes, green open valleys, wooded hills, river crossings, wetland and floodplains, sandy semi-arid dunes, rolling hills, dry riverbeds and of course open steppe. The entry fee is £11,375, and provides the rider access to 25-27 Mongolian horses, a support team, pre-race training, and access to the support stations along the way. Riders must change horses every 40 km at the support stations.

Along the way are vet checks to monitor the condition of the horses, and the vets may impose time penalties if the riders push their horses too hard along the trail. To gain entry as a competitor, each rider must demonstrate that their riding skills are strong enough to endure the harsh terrain of the race. The horses themselves are semi-wild, and may not cooperate with the rider, adding one more level of difficulty to the race. Riders will spend thirteen to fourteen hours a day in the saddle, and the race lasts ten days. To complete the race is an accomplishment in and of itself, as only half the racers usually finish the race in any given year. Below you can watch the video of The Mongol Derby 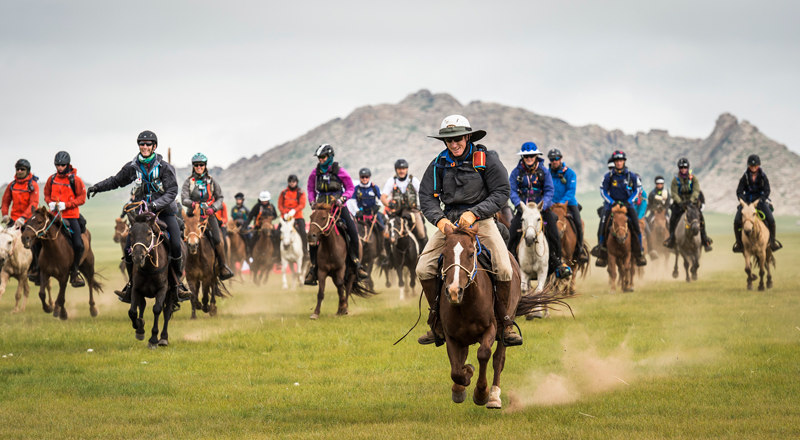