Jennifer was born in Michigan and grew up in Louisville, KY. She has spent over 20 years working with horses. Her first horse was Misti, a Saddlebred mare. After a few frustrating years in the Hunter/Jumper world (the judges do not like saddlebreds!), Jennifer and Misti entered their first event at Spring Run Horse Trials in Prospect, KY. They had a blast and finished in second place. This was the beginning of Jennifer`s love for eventing. 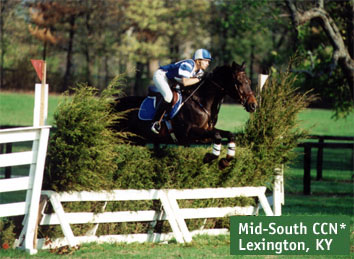 Jennifer attended college at the University of KY where she continued to compete in combined training. She also worked for an eventing barn in Lexington. After graduating with a degree in Fine Arts & Advertising, Jennifer moved to Dallas to pursue her career as an Art Director and Graphic Designer. She is currently running her own business, g2 Unlimited, designing everything from company logos to designing and building websites. Some of these websites include: Crosstar Equestrian Center, Redycourse., Roadrunner Farm, Area V Online, Unbridled Saddlery, Gold Chip Stables, Greenwood Farm, and Horselife, Inc..

In 1995, Jennifer found a green thoroughbred off the track, Tommy`s Pop Gun. She took this new prospect very slowly, in order to build Tommy`s confidence. The combination have had many great successes from Beginner Novice through Intermediate. Jennifer and Tommy have been in the ribbons in almost every outing. On their first 4 outings at the Intermediate level they finished in the ribbons with clean cross country rides. They have recently completed the Radnor Hunt CCI** 3 Day Event in PA. in October, 2001, finishing the entire XC course with one stirrup, and no jumping faults.

.Jennifer`s long term goals include: Fair Hill International CCI*** in Fall 2002, Fox Hall CCI*** 2003, and representing the USA in the Pan American Games and the Olympics.