Sired by Donnerhall, Dolendo is a talented dressage horse who was competed by British dressage rider Carl Hester. Dolendo was sent to Carl as a three year old and competed by one of Carl`s students Spencer Wilton winning many classes. Dolendo would then be competed by Carl Hester and together the pair went up the classes and competed in numerous grand prix`s winning nationally and internationally.

In 2008 Dolendo was short listed for the olympics in China, but was unfortunately ruled out due to injury, Dolendo was retired from international competition in 2010. In 2015 Dolendo was put to sleep at the age of 21. 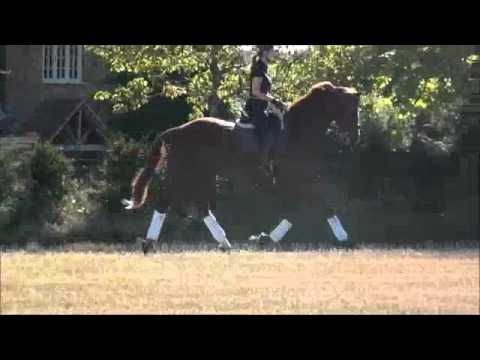 Sinclair is a 1.70m holstein stallion, born in 1976, sired by Sacramento Song xx out of the mare Batik who is a daughter of Ganeff. As a sire Sinclare has produced horses for the show jumping and dressage arena, progeny include Sunny Boy (Gran Prix Dressage Horse) and Solveig CH (Jumped 1.45m).

Arnaud started riding very young with a shetland pony at home at the age of 10, he discovered Doma Vaquera, which leads to dressage. He spends his mentoring as a professional to install. For almost 10 years, until 2008, he was the horse ball in elite category, having been part of the team of France.

Olga Belova is a dressage rider from Russia, she also combines her passion for horses with that of her art work creating beautiful equestrian themed art for walls of horse lovers near and far.

Ferrero Kiss is an international dressage stallion by French Kiss out of a Don Gregory, competed by Jessica Neuhauser in international grand prix classes, watch this talented stallion in action in the video below.

Susan Roberto is a dressage rider from the USA, along with her horse Arabella, Susan Roberto was successful internationally. Arabella is 1996 Danish Warmblood, sired by Rambo out of the mare April who is a daughter of Lando.

Michael Poulin is a dressage rider from the USA, born 10th June 1945 in Newport, Rhode Island. In 1992 Michael Poulin was a member of the American dressage team in Barcelona, together with his team mates he won a bronze medal. Below you can watch Michael Poulin in action with Thor M winning a freestyle grand prix.